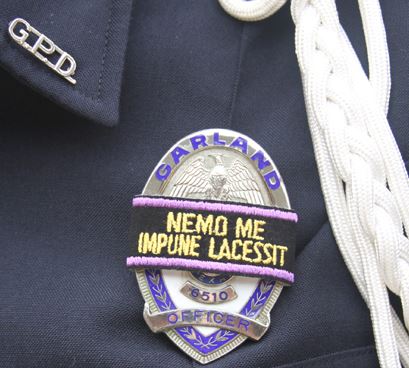 Units of the Honor Guard

The Honor Guard is divided into four major units:

All members of the Honor Guard are cross-trained in each unit and are able to perform in all positions.

The Arms Detail is responsible for the care and use of the Honor Guard shotguns. The detail consists of seven Arms Guard and a Detail Commander. The Honor Guard carries Mossberg 500A shotguns. The weapons are used in 21 gun salutes and parades. Members spend many hours in military drill maneuvers to establish and maintain their high level of proficiency.

The Casket Guard Detail is responsible for standing guard over a fallen officer. The detail performs their duty using silent commands when posting and relieving the detail members. The Casket Guards stand at each end of the casket and remain with the fallen officer until he is laid to rest.

The flag detail also marches in many parades and performs at opening ceremonies on special occasions.

The GPD Honor Guard attends many Texas Peace Officers’ funerals in the state as a tribute to the fallen officers. The Honor Guard has also performed several funerals for other police departments that do not have their own Honor Guard. The Garland Police Department Honor Guard has received the Best Overall Honor Guard trophy for the state of Texas.