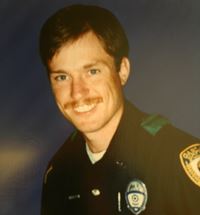 Officer Michael David Moore was a 10-year law enforcement veteran of the Garland Police Department and assigned to the Patrol Division when he died in the line of duty. On the morning of February 15, 1997, Officer Moore interrupted a bank robbery on Centerville Road near IH 635. Officer Moore was shot several times and later died. The man responsible for Officer Moore's death was captured at the scene.